All:  There are no train rides until April 2021.   A preliminary passenger train run schedule for the 2021 Summer season is on the Passenger Schedule web page.

The info below is intended for members of the Carillon Park Rail and Steam Society (CPR&SS) club members.  It provides additional information on safety, operations, maintenance, etc.

For the Carillon Christmas train runs, we are loading and unloading passengers at the north west door of the Transportation building.   The usual (daytime) loading station will NOT be used.

Conductor’s Emergency Button:  The conductor has a big red button he should depress to tell the engineer to stop the train.  Depressing the button sounds a warning siren in the engineer’s car.  The siren will also sound if any of the cars become separated and detach the cable between the passenger cars.  The red button needs to be rotated clockwise a quarter turn in order for the button to be released upward (off). Turn it clockwise then LET GO – the button should pop up on its own.  Top button picture shows button depressed.  Bottom picture shows button raised – note 1/8 inch gap under head of button in the bottom picture. 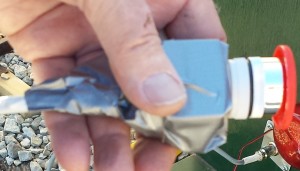 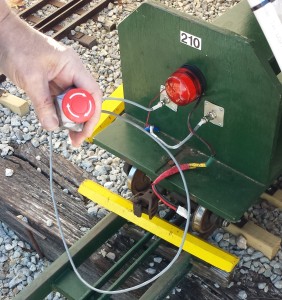 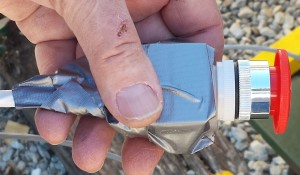 Cables Between Cars:  Below is a picture of the cable between each of the cars.  On end should be screwed onto a car and the other end JUST PUSHED in.  If cars separate then the cable will disconnect without damaging the cable.  The end with the green tape (or red on some cables) is the “push in” end and the tape should not be removed. 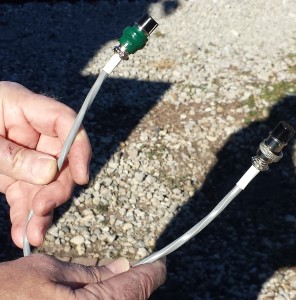 After the night’s run, make sure the battery chargers are plugged in and show the “Charging” lights are on.  Two connections are needed – one for the engine, and one to the battery in the engineer’s car that powers the lights on the passenger cars.  Please connect both.

Passenger cars are stored in the tarp tunnel by the steaming bay.   The locomotives will be stored inside the Yoder Engine House (YEH) as usual.

TRAIN:  Check the oil and gas levels before each night’s run.  Add SAE 10W-30 oil if needed (Not straight SAE 30 weight oil) – See picture below of acceptable oil – it’s in the YEH.

After the run make sure the battery charger is plugged in and shows “Charging” light is on.

If the engines are hard to start in the cold, try choking them.  On 1932, the choke lever is under the engine shell just out of sight to the left in the picture below.    Unchoke it slowly as the engine warms up in a minute or 2.  Run full UNchoked !  Make sure the IGNITION switch is on (up).  Note:  The starter motor will run with the ignition switch off – make sure ignition is ON.  On loco 615 (red loco), there is a choke control on the backhead of the engine.  Pull it out to choke the engine.  Push in as the engine warms and full in during operations. 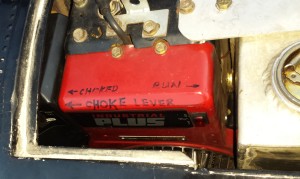 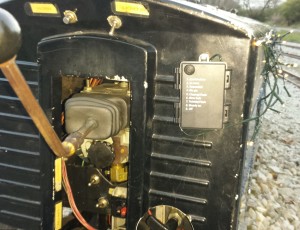 1932’s controls – starting from the upper left in the right hand picture above:  Horn button, loco’s headlight switch, little black box is Xmas lights on the Loco only – push round button to cycle through flashing options, black T-handle at bottom right is the throttle – twist and pull out to increase engine RPM, bottom silver toggle switch is IGNITION (Up is ON), next toggle switch up is the starter switch – push UP to run starter motor – this is a momentary switch so let go to release.  Round black knob above starter switch is the hydraulic flow lockout knob – Push IN to stop flow and lock the train’s wheels; pull out to run;  use the long angled lever to move the train forward or backward – push the lever to the left or right – see direction markings on loco’s shell.  Always LOCK the engine’s hydraulics when the train is stopped otherwise it will tend to move.

TRACK:  Switch handles should ALL be set to the YELLOW position.  See pictures below.  We are running the “School Route” for the night runs – remember: yellow for school buses.

LOADERS:  Passengers should be positioned in the MIDDLE of the cars to prevent derailing.  Also, cars closest to the locomotive should be loaded before those in back to also prevent derailing of the unloaded front cars – this is called “string lining”.

OPERATIONS:  This is what has worked well:  The station loaders seat people on the cars and when done announce “All Aboard” to the Conductor.  The Conductor blows his whistle TWICE – the Engineer then knows he can move the train and blows the horn TWICE to indicate the train is going to be moving forward.  At the end of the train ride, the Engineer blows the horn ONCE to indicate he has stopped the train.   All trains carrying passengers MUST have a Conductor at the rear of the train.  Please get a whistle, keep it as your own personal whistle, and use it your next times at the track.

During the run, the conductor can stop the train for any reason by pushing the RED BUTTON or blowing his whistle.   Engineers:  If you hear the siren or ANY whistle while running – STOP THE TRAIN !!!    Conductors:  Blow your whistle as loud as you can – it is difficult for the engineer to hear over the engine and track noise.  Radios should also be carried to call for any needed assistance.

Switch Signal Lights:  The two stub switches by the corner of the Transportation building have working signal lights.  RED means STOP !  GREEN means GO.  If the lights are not GREEN, then Engineers need to STOP  and make sure the switch is positioned properly.   Each switch should be set to the mainline position with the switch handle seated in the keeper blocks.  Make sure both mainline rails are aligned through the switch.  The switch signal lights are powered by a timer in the YEH and will be programmed to come on at 4:30 PM and go off at 10 PM.  The timer is on the left side of the refrigerator and is plugged into a power strip.  Wires from the YEH to outside to the signal lights are 12 Volts DC.  All of this should be previously set up and you should not need to mess with it.

YELLOW PAINT was put on all of the switches indicating which direction the switch needs to be positioned for the train run.  For SPRING switches (first picture below), move the switch handle TOWARD the yellow mark.  For the STUB switches (2nd picture below), flip the handle so the yellow paint mark is UP.  If the switch does not have yellow paint on it somewhere then it is not on the yellow route.  The route is the same as the School Run’s and is yellow like the school buses.  When riding past the Yoder Engine house, the train should be on the CENTER TRACK.

STUB switch: Flip the handle so the yellow mark on it is UP.

Decoration and building lights:   The decoration lights are set to come on at DUSK and be on for 6 hours.  The switch signal lights are on a timer in the YEH and are on from 4:30 to 10 PM.

ALL of the lights in the CPR&SS holiday run track area will turn on and off automatically, EXCEPT the lights on the Yoder Engine House (YEH).  The YEH building lights should be tuned off manually EACH night – either by flipping a brown toggle switch inside on the South wall or by unplugging the lights outside at the Southwest corner near the roof. 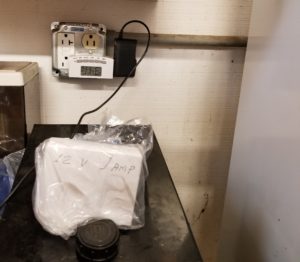 Switch signal light power – On timer beside the refrigerator in the engine house.  A backup 12 volt transformer is in the white box if needed.The decoration lights are set to come on at DUSK and be on for 6 hours.  The switch signal lights are on a timer in the YEH and are on from 4:30 to 10 PM.  A 12 volt DC power transformer is plugged into the side of the timer but does not show up in the picture above.

On top of the blue car is the re-railer.  If the locomotive gets derailed, you will likely need to use this re-railed to get the loco back on the track.  Hook the short end under the loco’s coupler and lift the loco over to the track.  A second person will likely be needed to position the wheels on the track.  If the rear wheels derail, you will need to separate the tender first.  This is when you need a flashlight and a radio!