The pictures below were taken during the public train run on Oct 15, 2016.  They are not in chronological order.  Click on each picture to see an enlarged version. 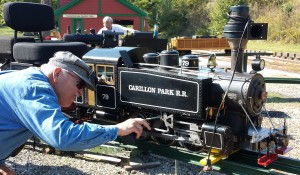 Locomotive #79’s blowdown at the end of the day’s running.

Brad on 615 with Norm on 652 on the right.  The track was set up to run the “double loop” which lets two trains run next to each other like this.  615 just left the station with new passengers on the outer (left) track while 652 (on the right) is half way through the route. Trains return on the track between these two trains here going the other way, of course.  There’s another return track that is out of sight to the far right.

Jason driving 652 with Lataya as the conductor.  Ken is walking back to his Shay on the siding.

Joe is checking this car’s front truck after it had derailed.  It was out of gauge due to a loose nut holding a wheel on which was quickly fixed.

John B’s loco on the turntable.

Ken with his Shay pushing a passenger car. 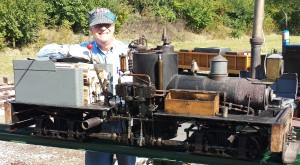 Ken posing behind his Shay for a picture to show to his steam-powered bicycle friends. 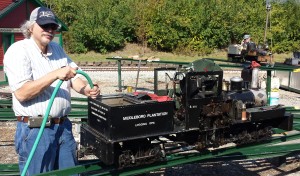 Mike adding water to his Shay prior to firing up.  Ken with his Shay in the background.  These two Shays are 2 of 3 made at the same time by CPR&SS club members years ago.  The third was sold to someone in California who apparently doesn’t run it (we hear).