The pictures below were taken during the train run on July 16th, 2016 at Carillon Park.  They are not in chronological order.  Click on each picture to see a high resolution version. 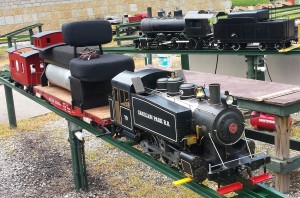 Bob S’s propane-fired steamer in front with     Dick F’s oil-fires steamer in back.

Bob S checking the wheels with the gauge bar.

Jim M on John B’s (in back) about to enter the tunnel.

John B on his electric loco leaving the loading station.