CPR&SS Members:   There are no more WORK DAYS planned at this time.     All decorations that the train club put up have been taken down.  Thanks to Norm G, Ken H, Bob S, Linda S, Jim H, Shaun H, Larry W, and John L.    Check back here later for updates.

CPR&SS Members:     The next train club meeting is scheduled for Saturday, Feb 13 starting promptly at 11 AM at Carillon Park.  Check back later for details and if the meeting is still planned.

Update of work done on Tuesday, July 21, 2020:  Three additional new tarps were put in place over the tarp tunnel and secured.  These are heavier duty ones being 15 mils thick.  Thanks to Ken H, Jim H, Larry W, and John L.   Jim H replaced the switch throw handle on one of the switches by the shelter with a low profile version.

Come help if you can.  Watch for the eagles – mom, dad, and 2 fledglings can be seen flying about.  Don’t run over the distracted eagle-watchers!

CPR&SS Members:  For those members who cannot work on Tuesdays, they are welcome to work Saturday (or another day) however you should contact other members to coordinate your work times and ensure that at least one of you has a set of keys.  It is best to have at least 2 members present when working for safety reasons.  Drink plenty of water – it’s free, in the refrigerator.

Work update:  Below is the torn tarp in the background – this was fixed last Tuesday (July 14th).  There was a lot of ballast spread, weeds sprayed, and track leveling also done.   There was no grass cutting done as members worked on other jobs. 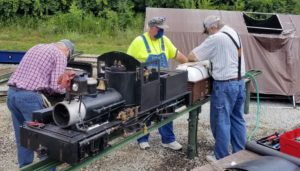 *****  Ken H has been successful in getting a portapotty delivered to the track area for train club workers.  It has already been delivered and set up.   Ken has also built and stocked a wash stand near the portapotty. 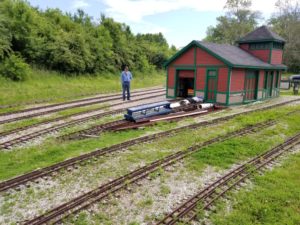 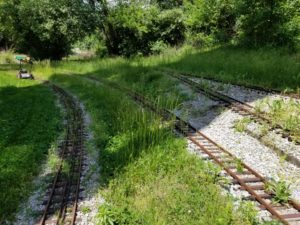 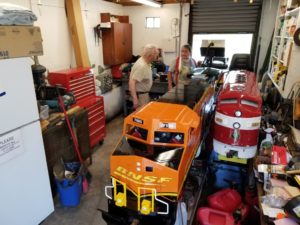 Thanks to Ken and Larry for repairing the tarp tunnel on  Tuesday, March 03, 2020.  Below is the “Before” picture, of course. 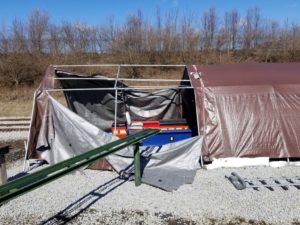 Below: Pictures from the Oct 02, 2019 Workday.  Bob W and Jim H replacing ties by the clock tower.  They are focusing their tie replacement efforts on the holiday train run route. 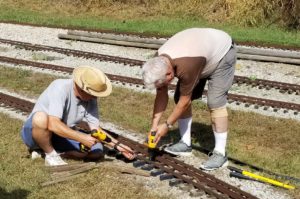 Picture below from Sep 04 Work Day.  Thanks to Jim H and Bob W pictured below replacing ties and also Ken H and John L for cutting the grass – it’s ready for Saturday’s train run. 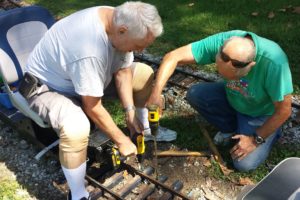 Note:  ALL storage tracks inside and outside of the tarp storage tunnel were  completed on the Aug 28 work day!  Thanks to all workers who helped on this big project. 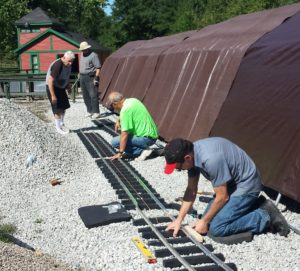 Near to Far:  Will G and Bob W attaching ties; Jim H and Bob S preparing the track bed for the next track section.

Below are Jim H and Howard W assembling a track section during the Aug 14th work day.  The new, just purchased, switch was installed this day and then the entire fourth track was laid inside the tarp tunnel.  Thanks to Jim and Howard and additional workers Ken H, Larry W, Bob W, and John L.  Other work items included painting the shelter (Ken) and grass cutting (Howard). 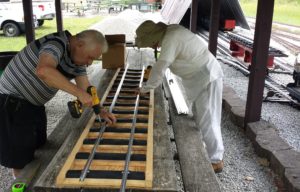 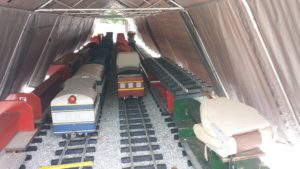 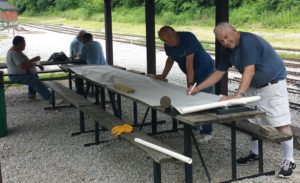 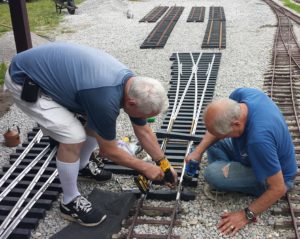 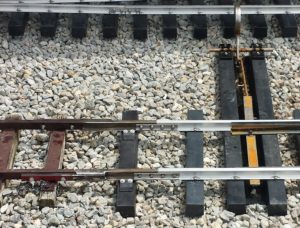 Connection to the switch’s Aluminum T-rail 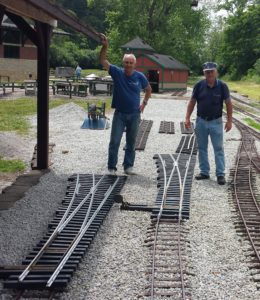 On the June 05 work day there were 5 jobs completed:  1) Rework the bridges and roadway, 2) Installed the first switch, 3) Howard W cut grass, 4) Larry W sprayed weed killer, 5) Bob W and others shoveled ballast to level and fill in areas by the switches.  It was a busy day but a lot got accomplished.  Thanks to all who worked.

The picture below is from Monday, June 03 and shows Larry W and Bob S assembling one of the 6 bridge units for the temporary crossover needed for the high lift vehicle to pass over our tracks to work on the clock tower.

Saturday is another day available for work if you want.  We recommend that you have a second person with you to act as your safety backup. 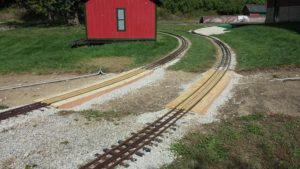 We completed the crossings over our tracks and the new sidewalk has been poured.  Thanks to Bob S, Will G, Howard W, Norm G, and John L on Oct 6th.  Below Norm and Howard are hanging lights for the Holiday train runs.   They actually worked long and hard this day and finished hanging the strands around the Transportation Building.  Photographer John L  just happened to capture them resting between work sessions – twice!

We understand that the construction workers are going to dig out the entire way to the tower on Wednesday and Thursday and another company will then pour the concrete for the sidewalk sometime later.

Below are pictures from the Sept 25, 2018 work day.  The rail section over the Scheu fly bridge was removed so the Park can install culverts in place of the bridge.  This is part of the clock tower upgrade which is seen in the background.  A sidewalk will also be installed for pedestrians to walk back to the tower.  Below left are (L – R) Jim H, Howard W, Larry W, and his granddaughter.  Below right is Larry grinding through the welds to release the rails from the steel tie plates.

Below left shows the rails after separation.  The four rails are for 7.5, 4.5, and 3.75 inch gauge trains.  Below right is a possible location for train storage which would free up the tracks beside the Yoder Engine House.

Below are pictures from work day on Sept 11, 2018.  Part of a larger Honeysuckle fell on the track by the new tower.  John L and Howard W cut it up and moved it so the track is ready for running.  Bob S and Larry W are checking the blue cars for wear with Norm G in the background.  Below right is Jim H working on the drainage ditch on the West end of the tunnel.  Sand, gravel, and rocks have been washed down and need to be removed. 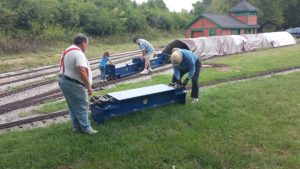 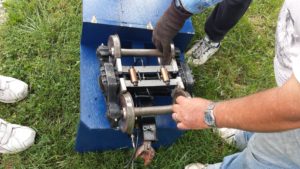 Work Day Tuesday, Aug 07, 2018.  Below are (L to R): Will G, Howard W, Bob S, and Larry W and granddaughter.  Not shown are Jim H and John L.  The picture shows the area where the culvert pipes will be placed for the track extension.  Measurements showed that four 18 inch diameter plastic culvert pipes would work best.

June 19 Work Day update:  There are 5 new blue cars ready to run – thanks to Bob, Norm, John, Don H, and Jim H (he drove to Tom Bee’s to get new trucks).  Larry changed the oil in 1932 and he and Lataya also worked on it’s horn that had been not operating right.  All of the grass has been cut – thanks to Howard and John L.  Thanks to Eric and his grandson for a lot of track work.  Bob did track leveling also.  Thanks to any others that may not be mentioned – it takes a lot to run a RR. 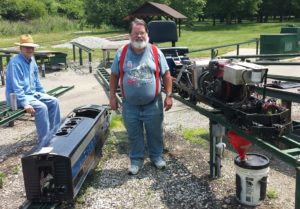 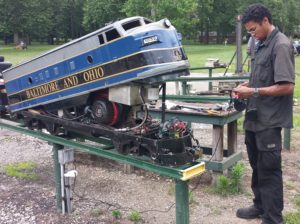 ******  Also, the special run occurred Sunday and the Rail Festival route was run with no problems.  This is the orange marked route.  John L brought one new blue car to the track and Bob and Norm are bringing the other 4 new blue cars to the track today (Monday).  They are finishing the new cars by adding brake lines and new trucks which Jim H drove up to Michigan and got them a couple of days ago.  We will have 5 new blue cars available for Rail Festival.  *****

From Work Day 2018 June 12:  Recent heavy rains washed a lot of debris down the hill.  Logs and boulders completely blocked the passage way under the bridge and diverted the water toward the tunnel’s entrance.  Mud, sand, & gravel covered the tracks about 6 inches deep in front of the gate.  It was raining so everyone got drenched during the couple hours it took to clear the tracks and dig out the passage way.  Thanks to Eric S, Howard W, Jim H, John L, and Larry W for clearing the tracks and working on other tasks.

It is still a little dirty and needs additional clearing of the debris.

Thanks to all who showed up on Saturday, June 9 for checking equipment, replacing the one engineer’s seat, and other work performed during the day.

The switch below left was damaged by a derail during the Heritage Day run but was fixed on the May 29 work day.  Thanks to Howard, Bob, Larry, and John for their efforts on Tuesday.

Thanks to Bob, Larry, and John L for working Saturday, May 26th.  Thanks to Don and Lois for bringing bottled water.

On the Saturday, May 26th workday, Bob noticed that the track had been damaged by the construction equipment.  Note the big dip just this side of the bridge.

Bob used the rail straightener on each rail to remove the dip. 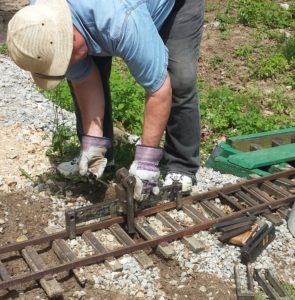 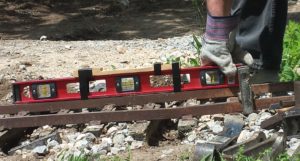 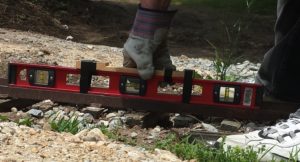 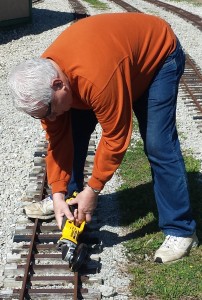 Thanks to Eric S, Bob S, and John L for working a long day on Tuesday, Apr 9th.  They checked out both lawn mowers and both work fine.  Eric mowed around all of the track while Bob used the leaf blower to clear out leaves from the switch boxes and off of the track.  John L cut back a lot of the honeysuckle around the West part of the track. 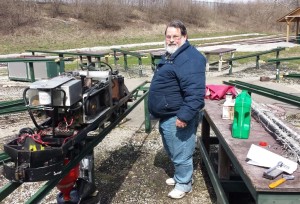 Update: The pictures below were taken on March 03, 2018 but nothing has changed since then til now.  They show steel plates over all three tracks for heavy equipment to access the inner loop area for the new tower construction.

Pictures from Work Day on Feb 27, 2018:  Also working this day, but not pictured,  were: Ken H, Larry W, and John L.    Below left is Brad in front with Norm and Howard to the left in back.  They are carrying the last load of holiday decorations away for storage.  The group in the upper right of this picture is Brady and 2 others.  The picture below to the right is Howard and Don H removing decorations at the loading station. 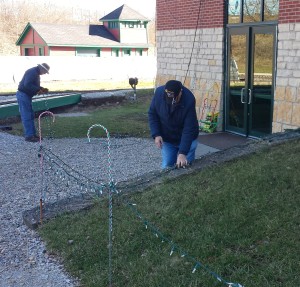 Below left are Norm and Brad taking decorations down at the far west end.  Below right are the steps by the switch tower – they need some straightening.

CPR&SS Members:  The pictures immediately below were taken on Tuesday, Nov 21, 2017 as preparations continued for the Carillon Christmas which ran from Nov 29th  through Dec 30th.   The next train run is April 07, 2018.

Below is Howard W. by the little tower, Bob S re-leveling the stub switch, Jim H.  and Howard putting the final touches on the tunnel, and Norm G. hanging the power for a display to be put up.  Not shown are Don H. and Larry W. who also helped and had their own projects. 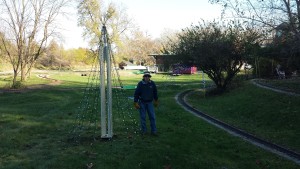 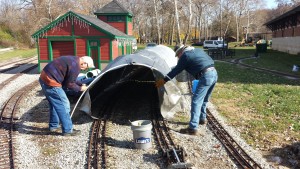 The next three pictures were taken on the work day on Tuesday, Oct 10.  Right below is Jim H  with a possible approach to a train tunnel for the holiday train storage.  It covers two tracks this year.  Tarps will be supported by the PVC pipes and fittings.  Other approaches are still being considered.  Other workers present this day were Bob S, Howard W, and Jim E who worked on the new track extension and John L  who installed the switch light shown below.

Below is Larry W  replacing the dirt and gravel over the conduit supplying power to the switch signal lights that are being installed. 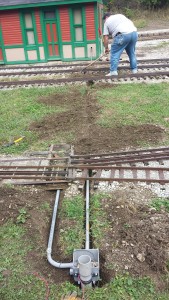 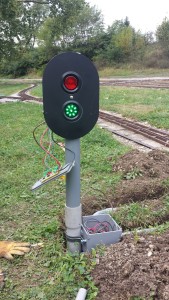 Above is the first switch light being tested on power from the Yoder Engine House.

Howard W.     after cutting the grass

At the March 02, 2017 club meeting, it was decided to have work days on Tuesdays and non-run Saturdays (if the weather permits).   Most workers show up between 9 and 10 AM.  If you come, we will put you to work on the track, grounds, equipment, etc – what ever needs attention.  Thanks, in advance, for your support!