The pictures below were taken during the work day on August 2nd and 5th, 2016.  Thanks to all who showed up for work these days which included:  Ken Hemmelgarn, Bob Schwenke, Jim Helmbold, Don Bigler, Craig Anderson, Howard Wesche, and John Laugle.  Thanks also to any other workers not listed here.

Bob leveling track by the Dicke Transportation building.  Bob uses the tool on the ground to lift one side or the other of the track and moves ballast where needed as indicated by the level.  Sometimes new, additional ballast is placed as shown on other work day pictures.  He then sweeps the area between the rails and then outside the rails. 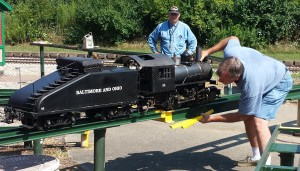 Craig brought his 0-4-0 steam engine for a boiler test.   Here, he’s transferring it from the turntable lift onto a steaming bay rail.

Preparing for the boiler pressure test.  Ken, in back, is filling out the test sheet. 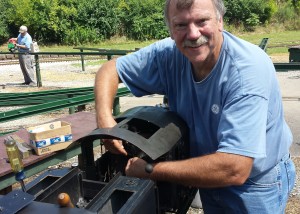 The boiler test was successful.  Craig is attaching the brass number tag onto his boiler.

Rotted ties removed from the track west of the tunnel.  This section of track stays damp much longer than other track sections and promotes rotting.

Jim with a line of the rotted ties from the track on the left.  134 ties were replaced this day. 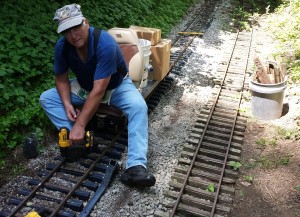 John installing some of the new plastic ties.  The old screws need to be removed, the old tie removed, larger screw holes drilled in the 1/8″ thick iron tie, insert the new plastic tie and center it, pre-drill screw holes into the plastic tie’s center web, then screw in the new larger hex-head screws.  This process works best with two people and two drills.  Six 20 volt battery packs were used this day.

Jim and Bob checking and working on the cars on Aug 5th.